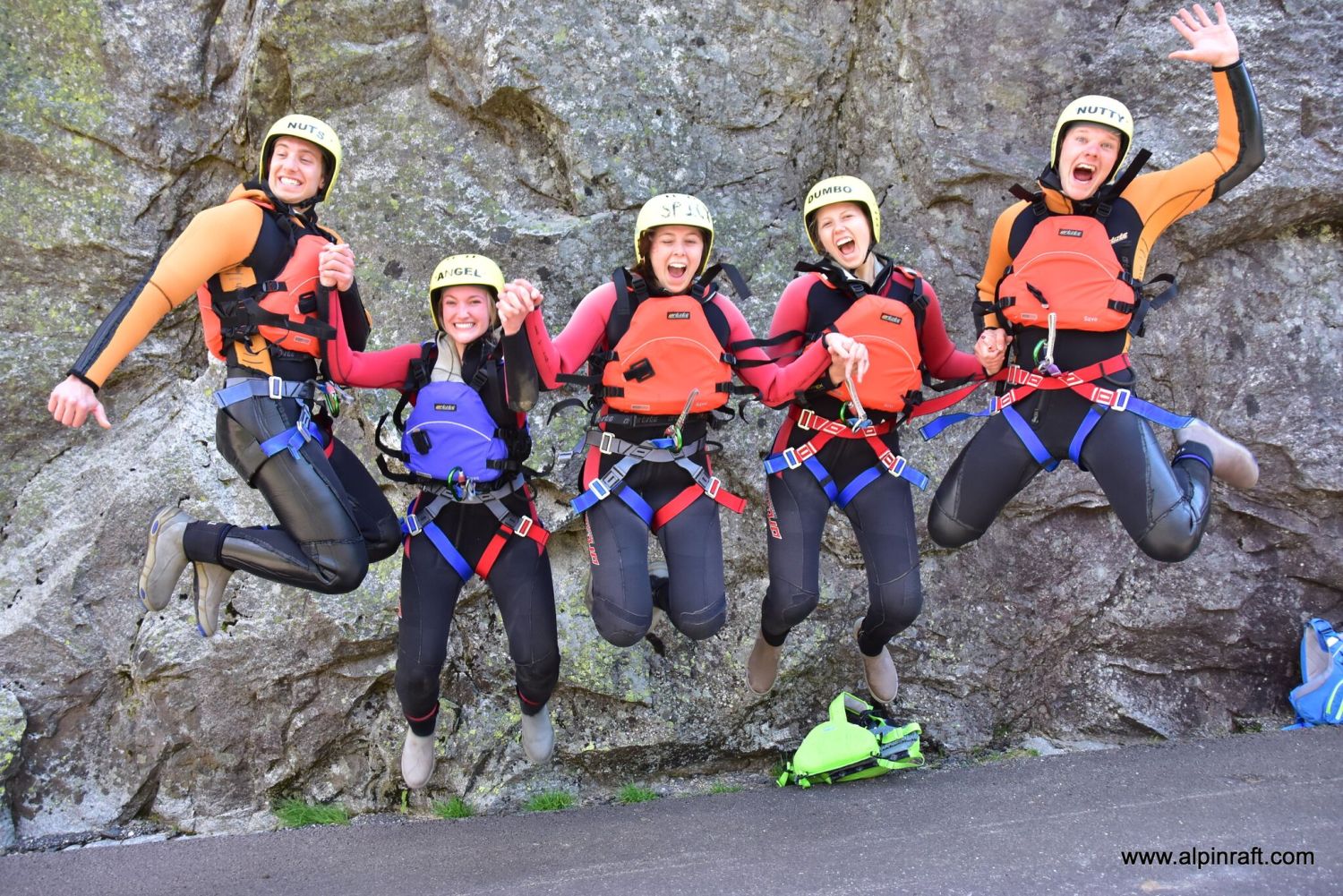 The saying is “When in Rome” right? Well, most of us changed it to when in Interlaken, we’d be in Rome soon enough. During the first afternoon in Interlaken, Switzerland, we all sat around a few tables and decided what extreme sport we would try in the World Capital of extreme sports. People tossed around ideas of skydiving, hang-gliding, paragliding, whitewater rafting, canyoning and more. How were we supposed to pick only two that we wanted to do (and could afford – you’re welcome mom and dad :). It wasn’t easy, but finally we all came to some kind of conclusion, canyoning and  paragliding for me.

Me and four others however, decided on the intermediate canyoning. At first we thought it was going to be 6 hours long, later we realized that was just the commute to the right canyon. We were told that it takes a little bit of crazy to do intermediate, but the five of us were just excited. On the morning of adventure day, I think every single one of us woke up a little nervous, but more excited. The anticipation was killing me! When the five of us were finally picked up at our hostel, we were ready to go. We signed some paperwork that they told us was German for “if you die, it isn’t our fault” and we continued to pick out socks and booties, wetsuits, and a helmet. The helmets all had names. We finally chose to go as Dumbo (me), Spicy (Kendall), Nuts (Christian), Nutty (Josh) and of course, Angel (Jacey). We packed into a van and drove up into the mountains for about an hour.

Finally we arrived at a small meadow where they told us to suit up. I’ve never seen anything funnier than  10 strangers strip down and struggle into wetsuits, boots, helmets, and life jackets. Along the way, we got some hysterical photo, and found out Victoria’s real Secret, wetsuits. “Who needs lingerie when you have wetsuits” may have been muttered by some. A few minutes later we loaded back into the vans and moved about 5 minutes up the mountain. We got out, took a few photos, and propelled ourselves down a 50 meter cliff. No big deal right?

I was the first one down, and so I got to the river and had no idea what to do. Stay clipped in or not? The guide tried saying something, but I was standing in moving water and he was 50 meters above. I finally got the message that I need to unclip from my harness. Once we all made it down, some more gracefully then others, the real adventure began. We walked, floated, jumped, hang glided, and fell our way through the canyon. There is nothing better than watching your girl friends trip and face plant into a river bed or watching your guy friends duke it out until they’re both underwater.  We laughed and splashed our way down the canyon, some moments better than others.

One of the things that our guide told us was most important was landing form. Some pools were shallower than others, so they didn’t want us hurting our legs by jumping in like a pencil. Apparently I wasn’t a very good listener. On the highest jump, they told us to do a cannonball jump, to keep our legs tucked in. After Kendal and Jacey had gone, I climbed up to the higher of the two jumping options. The guide pulled my life jacket and looked into my eyes. “Are you sure you’re a good jumper?,” he asks. I think I laughed a little. As a life time trampoline owner, and volleyball, basketball, and soccer player, I was pretty darn sure. I said something to the fact, he laughed, and said “clear the white stuff (aka the rapid), ok?” I nodded, took a big leap, held my nose, and landed in the middle of the white stuff. Whoops. When I surface, I see Jacey and Kendall’s faces full of concern before bursting out laughing. I’ve never been a fan of cannonballs, and apparently I went in like a stick. Whoopsie number 2. But all was good. Christian and Josh came shortly after, perfect form of course. We continued down the canyon in this matter, goofing around, taking turns going first, getting a bruise here and there, but most importantly, making memories.

I was so glad to have  gone with the other four people, working with them made the experience what it was. When we finally got out of the canyon two hours later, freezing cold, sopping wet, and hungry, we came up on the meadow we had changed in. What took about 5 minutes to drive, took two hours to canyon, but it was so worth it!